Last Friday, May 11th, Buke and I had the opportunity to interview Byron Davis of God Forbid before their show at Empire in Springfield, Virginia. Here is the video of that conversation. Sorry about some of the background noise, I was using an attached microphone which ended up picking up the noise of everything going on around us pre-show. Will try to use a couple of hand-held microphones next time. Anyway, check it out.

Go here to read the write-up of the show.

Back in January I had the pleasure of being able to interview John Allen of Charm City Devils before their show at Baltimore Soundstage. Sound check was happening in the background, so to compensate for the noise I made a last minute fatal mistake of switching from a room mic to a hand-held mic. This picked up John great, but about half way through the interview I realized it was not going to pick me up very well. I pushed on and finished the interview, but as you can tell from this video, I am very hard to hear. Oh well, you are not here to listen to me anyway right? John is the interesting one. Sorry about the audio issues, I have worked to remedy the problem in anticipation of future interviews. In the meantime, check out John Allen of Charm City Devils.

Last week Buke and I had the opportunity to interview Mikael Akerfeldt of Opeth before their show at Rams Head Live in Baltimore, Maryland. We arrived at the show expecting to interview Martin Axenrot, but he was unavailable, so Mikael stepped in. Luckily we had some Mikael-oriented questions on stand-by. Check out the video of the interview below. See the next post for a review of the show and some photos.

Last Saturday, October 15th, 2011, Buke and I had the opportunity to film an interview with John Kevill of the mighty thrash titans Warbringer. We showed up early for the show, which was in Frederick, MD of all places, and John was gracious enough to take a walk out back and answer some questions. After the interview we got to enjoy watching Diamond Plate, Landmine Marathon and Lazarus AD play before John took the stage with Warbringer and played a crushing set. But you can read more about that in the review of the show. For now, see below to check out the interview in full HD. (Make sure to select 1080p and full screen for the best view.)

RMC Interview with Deron Miller of World Under Blood 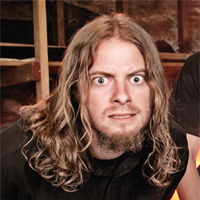 Q: What’s the story behind World Under Blood and how the band came together?

A: Tim Yeung and I discovered we were fans of each other and we met in L.A. and started playing. We wrote a bunch of songs whenever we had the time. Then I just found Luke through an internet clip and was totally impressed.

Q: World Under Blood is quite a bit heavier than CKY, what inspired you to do something so different?

A: I’ve always been into death metal and rock and roll, and it was time to do a death metal record. I shouldn’t have waited so long though because the album format is long dead.

Q: How do you like doing death metal compared to hard rock? What are some of the differences in how you approach the two styles?

A: I’m completely secure in my abilities as a metal musician, I consider myself somewhat of an expert in that field. I’m not a big fan of what’s going on in metal right now, even with some of the older bands that I used to love. In hard rock, I find it trickier because it’s more about molding something that has limitations....rock follows a certain formula, at least if you want people to be able to understand it.

Q: Were there any metal albums that you listened to for inspiration while writing this album?

A: All my favorite metal records are sitting on my brain. I don’t have to listen to them anymore. The inspiration for World Under Blood was pretty much wanting to know what it would sound like if I just let myself loose and didn’t think about how we would sound. What we ended up sounding like was completely organic. There was no "lets try and sound like Black Dahlia Murder or Trivium" it was just write and go, write and go.

Q: The vocals on this album are harsher than I’m used to hearing from you. Did you have to do anything different to take care of your voice when recording this album?

A: No. I can scream for days. It’s actually a lot more therapeutic for me to scream in my songs than it is to sing. Death metal is very therapeutic, it’s a shame that more people don’t respect it and enjoy it. Screaming your lungs out in anger during a heavy song is better than killing someone. A lot of death metal bands aren’t screaming though, they’re gargling...too many don’t sound angry enough.

Q: What are some of your favorite tracks off the album and why?

A: I love the whole damn thing. It’s a perfect 10 in my book. If i hadn’t made the record, I’d have nothing heavy to listen to right now. All I listen to is World Under Blood and Weird Al Yankovic.

Q: What was it like to have metal guitar legend James Murphy producing the album?

A: He co-produced. Most of the production was handled by me. He helped with vocals, and had a great ear for timing and tuning and things like that. He was a lot of fun to work with and is very seasoned in what he does. He really knows metal. The album was mixed completely by him, but it was produced mainly by me.

Q: Any plans for touring?

A: Working on it.

Q: Will World Under Blood be an ongoing project or is this just a one-off?

A: I want it to keep going, but it’s 2011...and these days it’s hard to find out as a band what your worth is, because so many "fans" will steal your music. So if the records don’t sell well enough who’s gonna give you money to do another? I don’t know. And whether a metal record sells 1,000 copies or 30,000...to me, those are both bad numbers. Earlier in the decade I did records that sold hundreds of thousands of copies in the U.S. alone, so I’m not used to being happy about a couple hundred CDs a week haha. So we'll see.

Q: What do you enjoy most about making music? What aspect makes it all worthwhile? (For example the creative outlet, or the satisfaction of creating something, or the rush of playing in front of a crowd etc;)

A: I like the end result of a finished and mixed song. I love hearing it for the first time. There is the energy of the crowd that I enjoy as well, but I’ve never done death metal live, and I think its going to be extremely explosive, if it happens.