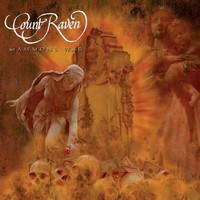 I’ve been a fan of Sweden’s Count Raven for a number of years, but until “Mammon’s War” I was never hardcore about them. I liked their older material, but had assumed by the 13 year gap between albums that there wouldn’t ever be new music. Well, as is so frequently the case, I was wrong.

I have to admit that I was pretty excited when I heard a new album was imminent. As has been my pattern of late, I snagged it from iTunes as soon as it went on sale (I don’t know how it works elsewhere, but new “albums” are released here on Tuesdays, and I’ve found I can get them from iTunes around 11 PM Monday night, so I tend to snag them before I go to bed Monday night. It makes for a weekly Christmas-morning feeling of knowing I’ve got something new waiting for me in the morning lol.) Sometimes I make impulsive iTunes purchases from my phone because it is just so easy, and end up regretting it because the album isn’t very good. That was not the case this time.

Count Raven fall into the doom metal category quite nicely and there is no doubt of their deep Black Sabbath worship. In fact singer Dan Fondelius sounds like a dead ringer for Ozzy; it’s almost kind of creepy if it weren’t for the fact that this music is just so chuck full of doomy goodness. It’s heavy, plodding and epic and along with Germany’s Dawn of Winter has put me on a months-long doom metal kick like I haven’t been on in years.

I love the production on this album. While the earlier albums were listenable, the poor production on them did detract somewhat from the listening experience. Much like an old Misfits album, I liked the songs because they were good, but the production left much to be desired. You can say that it adds character or gives a “raw” feeling to the music if you like, but I like a good production, and this album is much better produced than the earlier material.

I hope we don’t have to wait another 13 years for a new Count Raven album.

White Wizzard - Over the Top 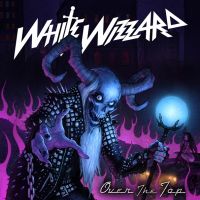 In the early 1980s there was a sound that for the most part passed on once the Big Four introduced thrash and speed metal. This isn’t to say no one played that way anymore, but many bands started falling into either the thrash or glam subgenres. This sound came from well known bands like Iron Maiden and Judas Priest who were NWOBHM pioneers and then perhaps lesser-known American bands like Warlord, Attacker and Omen who were likely influenced by the NWOBHM. I loved this sound. It was more complex than the metal of the 1970s but not so overproduced as the metal you hear today. You could hear all that great riffage rather than just a wall of fuzzed out guitar and blast beats (which has its own merits). This sound, when combined with the speed and fury of punk would breed the thrash metal sound. But before all that it was just good solid metal.

I used to find tracks by these bands on compilation albums when I was just learning of metal, and so I’ve got fond nostalgic feelings for music from that period. Warlord’s “Child of the Damned”, Attacker’s “Disciple” and Omen’s “Ruby Eyes” will always transport me back to those early years. I’m always on the lookout for a lost gem from this period that I’ve never heard. It’s probably this music that fueled my insatiable need to hear all that is metal, in the hopes of finding something from the period that I’ve overlooked.

So imagine my delight when young new bands like White Wizzard, Steelwing and Enforcer strive to resurrect this long abandoned sound. There’s been a thrash revival the last couple years, but this is different; this is like a pre-thrash revival. NWOPTR anyone?

I remember listening to the first White Wizzard EP and not being impressed because the singer’s voice was just too high pitched for my taste, so I wasn’t expecting much when the full length debut “Over the Top” was announced. However, I was unaware that there was a new singer on board, and that made all the difference.

I listened to a few tracks off “Over the Top” on the bands MySpace page and was blown away by how good they sounded and how well they played in this old style. Some songs reminded me of Warlord. While others have an early 80s Judas Priest sound (not to mention their dead-on cover of “Heading Out To The Highway”). My favorite song, though, has got to be “Iron Goddess of Vengeance” which channels John Arch-era Fates Warning as though it was a lost track from the Guardian sessions. Within minutes I bought the album on iTunes and played it non-stop for the next several weeks.

If, like me, you are a dinosaur from that era, you just might find yourself enjoying this album like no album that’s come out for awhile. If you are younger than that, then just give it a try to hear some really good metal.